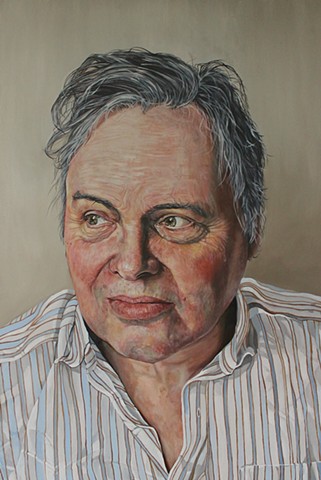 In the late 1970s, my father designed the hardware of the first Acorn microcomputer for home use. It was a breakthrough in home technology at the time.

For some years, he worked alongside Clive Sinclair and Christopher Curry, who are considered to be the founders of the Cambridge microcomputer revolution (Often referred to as 'The Cambridge Phenomenon').

In 2009, the BBC filmed a one off drama entitled 'Micro Men' which explored the rivalry between Sinclair and Curry during the rise of the British home computer market during the 1970s and 80s.

While I definitely don't inherit any of my father's scientific and mathematical skills, we do have creativity in common. I painted him because I wanted to capture the man I know, but also to celebrate all his achievements. I am very proud to know him.