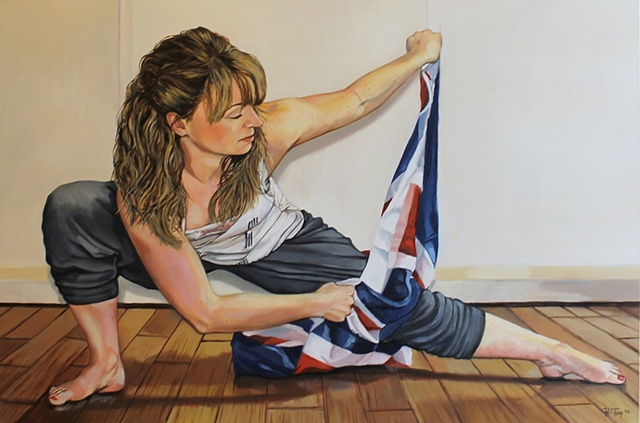 The gallery I exhibited with in London decided to host an Olympics themed exhibition for 2012. All the artists involved were asked to create a painting which was our take on the games and what it meant to us.

As a portrait painter, I wasn't sure how I could incorporate my practice to fit in with an Olympic themed painting. Should I paint an athlete? Take a photo off the internet and try to get the personality through of someone I had never met?

It occurred to me that my friend Veronica was performing in the closing ceremony of the games. The thought of painting someone I knew appealed to me so much more than the other option, so I met her at her dance studio in London and took photos of her while she danced. The flag she holds is the Union Jack.

Veronica is so graceful and beautiful with a kind heart. As she was dancing the sun streamed in from the studio window, casting a golden glow across the room. With this painting I wanted to portray someone who wasn't famous or taking the limelight in a tournament. Instead capture forever my friend who works so hard, is so beautiful and will now go down in history as being part of this unforgettable event.