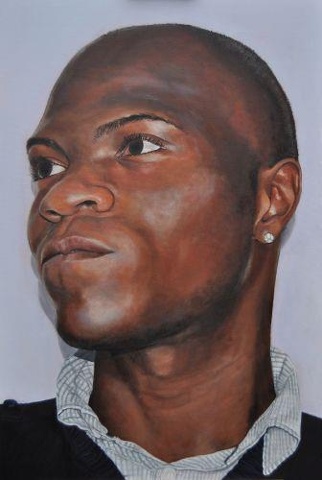 Featured on the front page of the Independent, The Guardian, Cambridge First, Cambridge Explorer and Style Magazine.

Brian Belo (Winner of Big Brother 8, television personality and magazine columnist) posed for a painting in 2011.

I wanted to capture a side of Brian which wasn't the one everybody knew from television. He is such a funny, smiley character, and had me in stitches while he posed for me. However, it was also clear he had a very thoughtful, quieter side which I was keen to get across to people who only imagined him one way.

I love the way he looks in this painting. He didn't have his trade mark blue contact lenses in, so his face is completely natural, and his expression is reflective rather than posed.